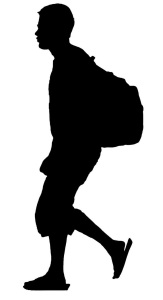 (Research) Unless hiking, or on a school campus, a man carrying a backpack is always “kinda creepy”, according to a new independent study done by researchers at the Swiss Department Of Social Sciences. The research project, headed by department founder, Noah Rorschach, polled roughly 800 U.S, residents, both male and female, between the ages of 18 and 50. The study asked people to write down their first five thoughts when shown a short video of a man walking down a street carrying a backpack. Below are the five most frequently repeated responses:

During the study, all participants were also shown two other photos: one of the same man with the same backpack walking on a college campus, and another of the same man hiking in the wilderness.

“Hey, totally different thing,” explained Rorschach, “I mean there’s nothing odd about a guy with a backpack in those two scenarios.”

The full report will be published next month, and can be viewed at http://www.sdss.gov/study/dosanddonts/bp